Is your Hourly Wage actually Less than What you Thought? 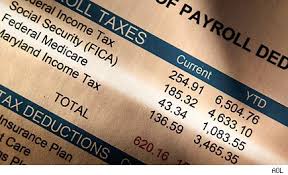 Now an interesting thing - whatever your hourly rate is, is not actually what you are being paid.

Let's look at a practical example:

So that is a 'standard' paycheck for working 80 hours in one pay period. Yet here, you are not actually bringing home the 'minimum wage' set by the law as the federal requirement. The reason being, there are taxes that are then taken out for various purposes. Mainly, in the US, we have the OASDI and HI taxes which are the Social Security and Medicare taxes, sitting at 6.2% for OASDI and 1.45% for HI (Medicare).

So let's now remove these taxes from your taxable wages, which is what we calculated above, the $580.

Once the taxes are removed and you are given your paycheck, the total hourly wage you are ACTUALLY "making", or is for you to support your life, is now at $6.69 an hour (535.63/80 hours). What this means is that after all is said and done, you are making lower than the federal minimum wage of $7.25 an hour, which is apparently set as a standard to ensure a minimum wage for all workers in the US. Yet we can clearly see here that we are not actually making that amount - we are making 56 cents less than that amount. One might say that is nothing to gripe about, yet it all adds up.

Now I'm not saying that we should not have to pay taxes or that 'taxes are the bad guys, and do away with taxes', what is clear here is that the Minimum Wage should be set as a rate that takes into account the taxes that are being paid. The Minimum Wage should be set at a rate in which, once the taxes have been removed, equals that of the Federal Minimum Wage, definitely not lower. I say definitely because it does not make any sense, why set a MINIMUM amount when one is actually making LESS than the MINIMUM amount?

We already know that the current minimum wage of $7.25 for an individual working full time, does not cut it in terms of actually supporting one financially, and then we see now that we are making even less than that. The point of the Minimum wage would to be to ensure that a minimum amount is guaranteed for ALL workers to ensure their ability to provide themselves the access to ALL Human Rights - food, shelter, water, education, health care, etc. The Minimum Wage is currently providing the most minimal standard of living and cuts people off from accessing a more dignified, comfortable life. No one should have to work more than 40 hours a week to survive, if they choose not to. No one should have to work more than one job to ensure they are making more than the hourly minimum wage rate. No one should have to be forced into positions where they are stuck, doing what they can, just in order to put food on their table and a roof over their head. This should all be guaranteed, because it is a human right.

No one should have part of their less than effective income be removed to then pay in to support others. It's not "Give and Get Less," it's "Give and you shall Receive." And so as we give, we should receive - a balance economy that is effective in supporting everyone - that is truly an advanced society; one that functions in harmony.

So the point I wanted to make here is simply that we are fooling ourselves in thinking the current minimum wage is doing it's job effectively, when we can see in the numbers above that the actual minimum wage is not the real minimum wage that goes to those that are working the hours.

Why not give a wage in which takes into account these other costs and yet still allows one a decent wage to live.

I will go more into various other perspective in regards to Minimum Wage in blogs to come. In the meantime - investigate the Living Income Guaranteed proposed by the Equal Life Foundation that recognizes the fact that we have lost sight of how to ensure a healthy and thriving population, which in turns provides a healthy and thriving economy. It realizes that a Living Income becomes more effective than a Minimum Wage and should be set to ensure a standard of Living that is Best for Everyone, because in the end, that is our Basic Human Rights.

Posted by Kristina Salas at 7:11 PM